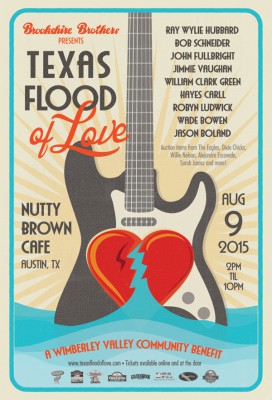 In the wake of the staggering Memorial Day weekend flooding that ravaged Wimberley, Texas, a close-knit group of musicians, artists, and the Brookshire Brothers Grocery have come together to serve as a force of love for their unique community. On August 9, 2015, a premiere benefit concert called TEXAS FLOOD OF LOVE, will be held at The Nutty Brown Cafe & Amphitheater in Austin, aiming to make a difference to the Wimberley Valley community and the families that have endured such heartbreak and loss.

Friends and family…. let’s fill the space with a flood of love that will be remembered for years to come!

TO BID IN THE SILENT AUCTION:

By text: Text Love to 71760 to register for the auction or make a donation.

Online: Place bids or make a donation via text or online at http://text2bid.net/go/love

Items to be auctioned include: