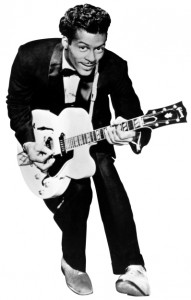 Everyone at Fullbright HQ is very pleased to announce that John has been selected to be one of the performers playing at the American Music Masters Tribute Concert Honoring Chuck Berry in Cleveland this October.

Tickets for the concert will go on sale to Rock Hall members on Sept. 17, and to the general public on Sept. 19. More information may be found at the Rock and Roll Hall of Fame website.